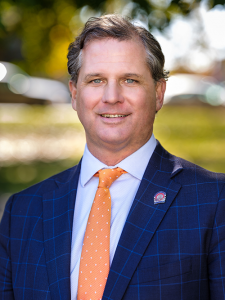 Lou Baldwin joined The Baldwin Companies in 1986 and has been the owner and President since 1989. Lou has established himself as a leader in the Winston-Salem community through his civic and professional involvement. Lou’s involvements include: Past President of the 40,000 member North Carolina REALTORS. Lou currently serves as Economic Development Committee Chairman and on the Board of Directors and Past Presidents Council.  Lou chairs the Consumber Communication Committee of the National Association of Realtors (NAR), which oversees a $42 million consumer advertising campaign. Lou also serves on NAR’s Member Communications Committee. Lou serves as a National Association of Realtor’s Federal Political Coordinator (FPC), the Association’s primary liaison to United States Senator Richard Burr. Lou was recognized in 2017 with NAR’s FPC Meritorious Service Award, granted annualyy to two FPCs nationally who have demonstrated exceptional service.

Lou received the first “Beacon Award” from the Bethesda Center for the Homeless in 2009 “for helping Bethesda carry out its mission to move homeless men and women from streets to housing.” In 2005, Lou became the first recipient of the North Carolina Association of Realtors “Federal Political Coordinator of the Year Award.”

Lou has been recognized for his service:

Lou chaired “Realtors for Burr” in 2004 and 2010, a statewide effort supporting the Senator’s campaigns. Lou served from 2007-2010 on the “10 Year Plan to End Chronic Homelessness” Commission”, appointed by Winston-Salem Mayor Allen Joines. Previously Lou served on the “Mayor’s Blue Ribbon Panel” that wrote the 10 Year Plan. Lou is very involved in issues of homelessness through a number of church and community efforts. Lou has served the Winston-Salem Association of Realtors (WSRAR) in various leadership capacities including:

Lou is active in the National Association of Realtors (NAR)

Additional involvement in our community has included:

Lou and his wife Leslie have 2 sons. Lou is a Graduate of Forsyth Country Day School, and is a 1986 Graduate of the University of North Carolina at Chapel Hill with a Bachelor of Arts Degree in Economics. Lou’s wife Leslie is the Foreign Language Program Specialist for the Winston-Salem/ Forsyth County School System.